It’s October in Lochaber and the weather has read the script. A brisk wind lends an autumnal chill, ushering clusters of showers across the landscape. Gone are the calls of summer waders and gone too are the lush greens from the strath. The ground underfoot is waterlogged, the spongy sphagnum oozing water with each step.

In a line, our team of five marches up the hillside, following a lively burn that drains a loch high above us. It is a steep climb that sets my heart pounding, but the views continue to improve as we gain height. Spirits are buoyant, because although we are looking for a rare species, this particular lifeform cannot evade us. That is the beauty of tracking down wild trees: if you know where they are, they’ll be there. 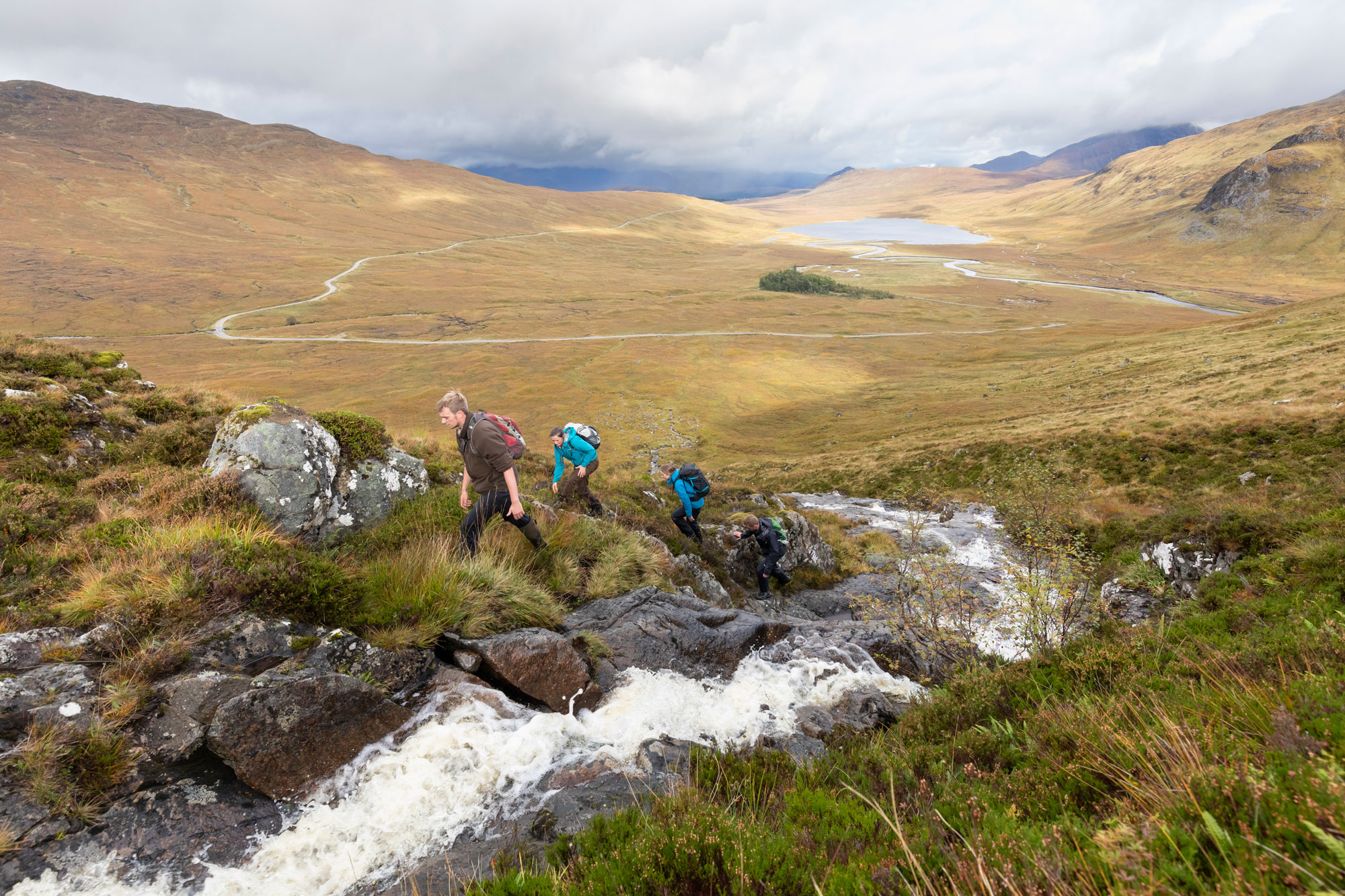 Our quarry is a scattered population of mountain birch (Betula pubescens tortuosa), a high-altitude form of the familiar Highland species the downy birch (Betula pubescens). These trees once grew extensively across Scotland’s mountains above around 600m, forming a forest zone that is known elsewhere as the “birch belt”.

Montane woodlands of any sort are rare in Scotland – less than 5% of our total native woodland lies above 400m – and the birch belt is a habitat that has been almost completely obliterated; lost from our landscapes for so long that it has faded from our cultural memory.

Birchwoods would naturally be the key component of Scotland’s treeline across much of the country, as is still the case in neighbouring Scandinavia. Over there, mountain birch grows at higher elevations than Scots Pine, continuing up the hillsides and merging with alpine willows, dwarf birch and juniper scrub as the last tree species standing. Here in Scotland, those same habitats have been lost through centuries of over-grazing, apart from a few willow bushes clinging on in places herbivores cannot reach.

Across much of southern Norway, an area that is geologically and climatically similar to Scotland, vast swathes of alpine plants, shrubs and trees carpet the uplands.

Our team picks a path through some deeply gullied peatland and a brief lull in the showers allows us a glimpse of our destination: a chain of small islands strewn across a loch. Before long we are out on the water, zigzagging in an old rowing boat towards one of the larger islands, where we can see groves of trees growing around the water line.

Once ashore, the team splits up to scour the island for botanical treasures. It is immediately clear from their reactions that these unremarkable-looking islands are full of floral interest. Despite being separated by less than 50m of peaty water, they are almost never visited by the resident red deer. As a result, the vegetation on these islands exists in an entirely different grazing regime to the surrounding moorland. From the abundant lichens, to the mountain birches and willow scrub that survives here, they represent an ecological counterfactual: a snapshot of what Scotland’s uplands could look like. 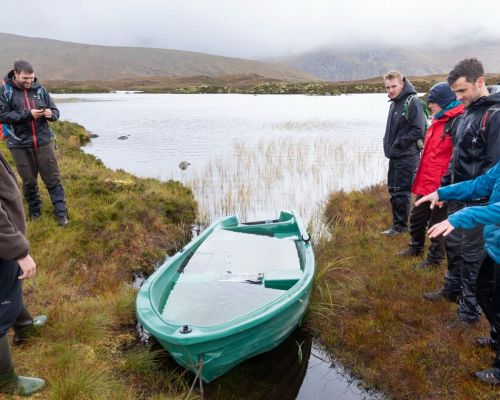 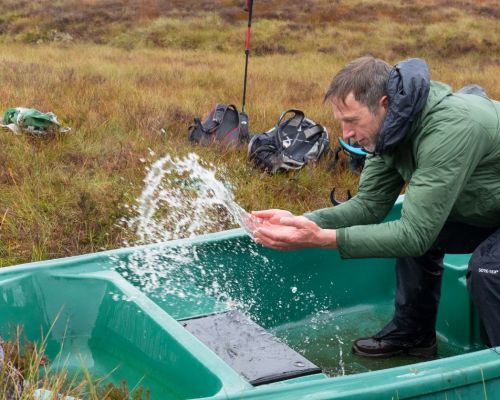 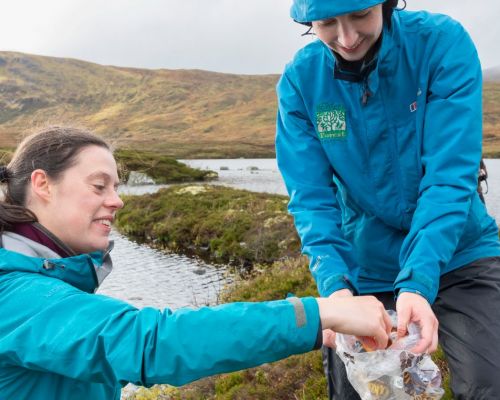 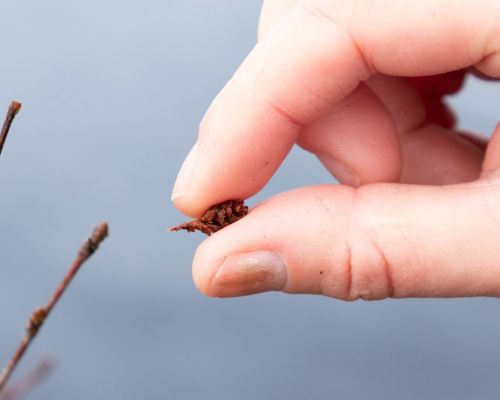 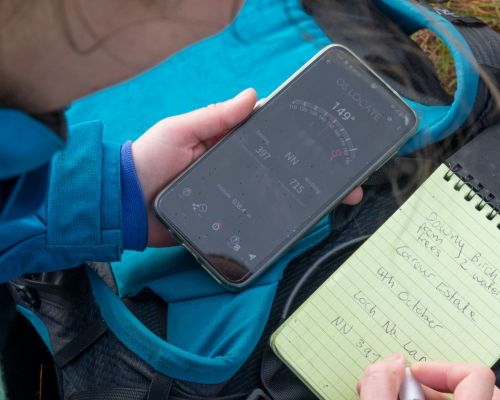 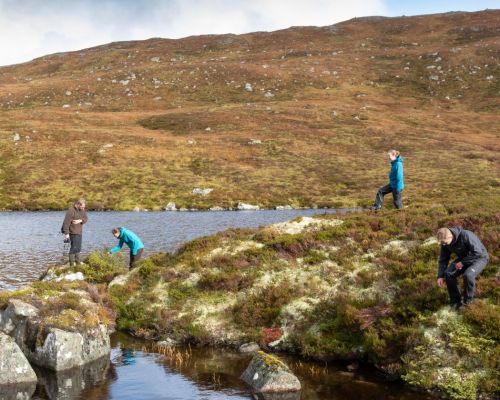 “Have you found any with catkins?” Nicky Hume asks, reminding me that we didn’t just row out here to stare admiringly at the little trees. Catkins are the sexual organs of many tree species: hanging clusters of tiny flowers that are either male or female in form and function. We were targeting female catkins on this trip because at this time of year they will be ripe with seed.

We find our prize  – hundreds of catkins hanging like Christmas decorations

Shaking my head, we wander towards a clump of birches growing on the southern side of the island. Their leaves are already golden, several weeks further into autumn than their counterparts in the glen and, although the trees are only a metre in height, they have thick, multi-stemmed trunks that betray their considerable age. Hanging from their branches, we find our prize – hundreds of catkins hanging like Christmas decorations.

Our mission to collect these seeds has come about as a result of the Mountain Birch Project, a new initiative with two objectives. The first is to understand what remains of Scotland’s montane woodlands, by mapping those places where trees still grow above the 600m contour. The second is to harvest viable seed from wild populations of mountain birch, so that these altitude-adapted trees can be grown in nurseries and used to reinstate Scotland’s birch belt. 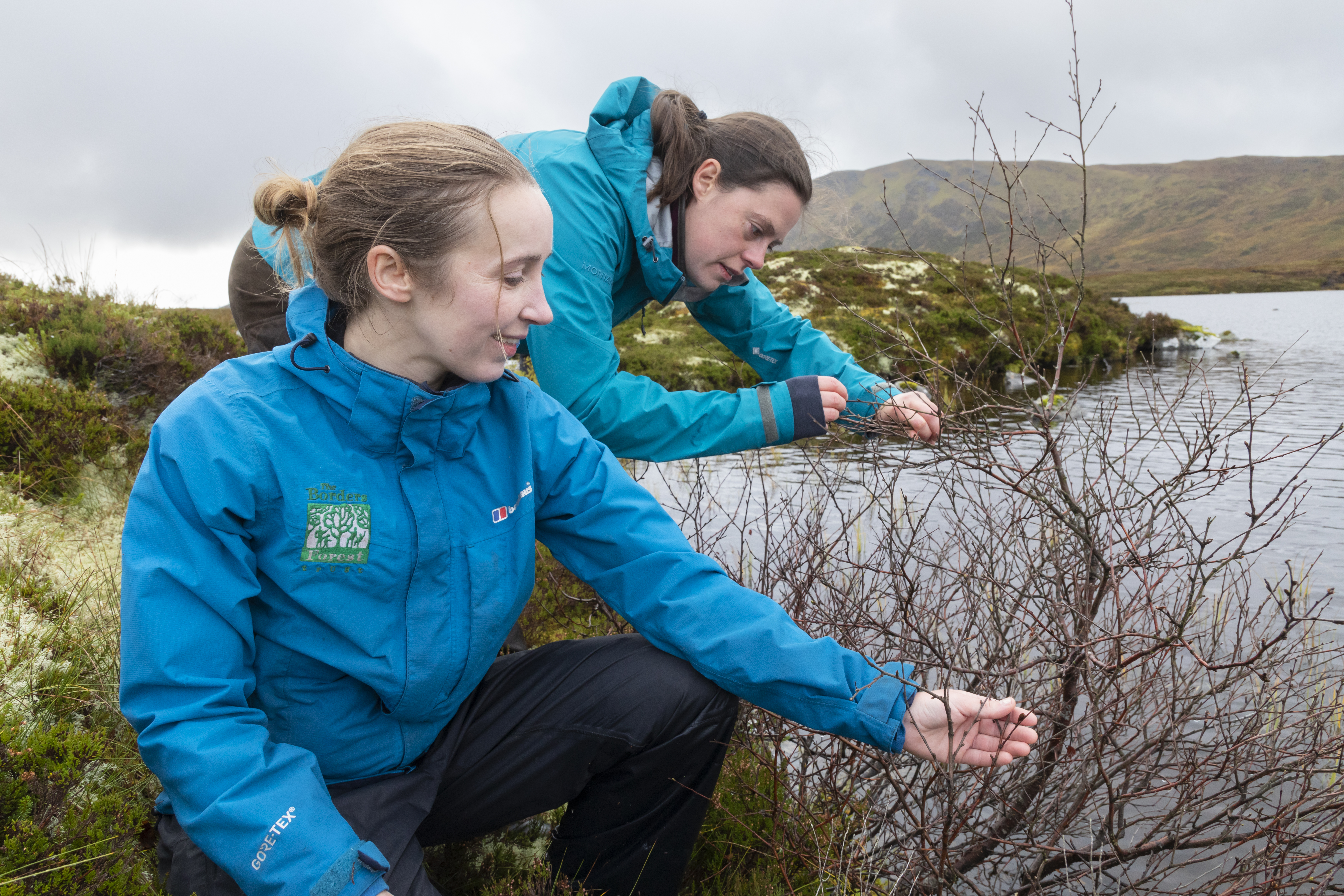 That ambition is close to Nicky’s heart, both personally and professionally. Working as a woodland adviser for the Borders Forest Trust, she hopes to return mountain birch to the high ground of the Moffat Hills, where it remains a missing piece of the ecological puzzle. As Nicky harvests catkins, she explains to me that the seed will be grown on at Proven Plants, a new nursery specialising in native trees, before the Trust plants the saplings out in the Borders. 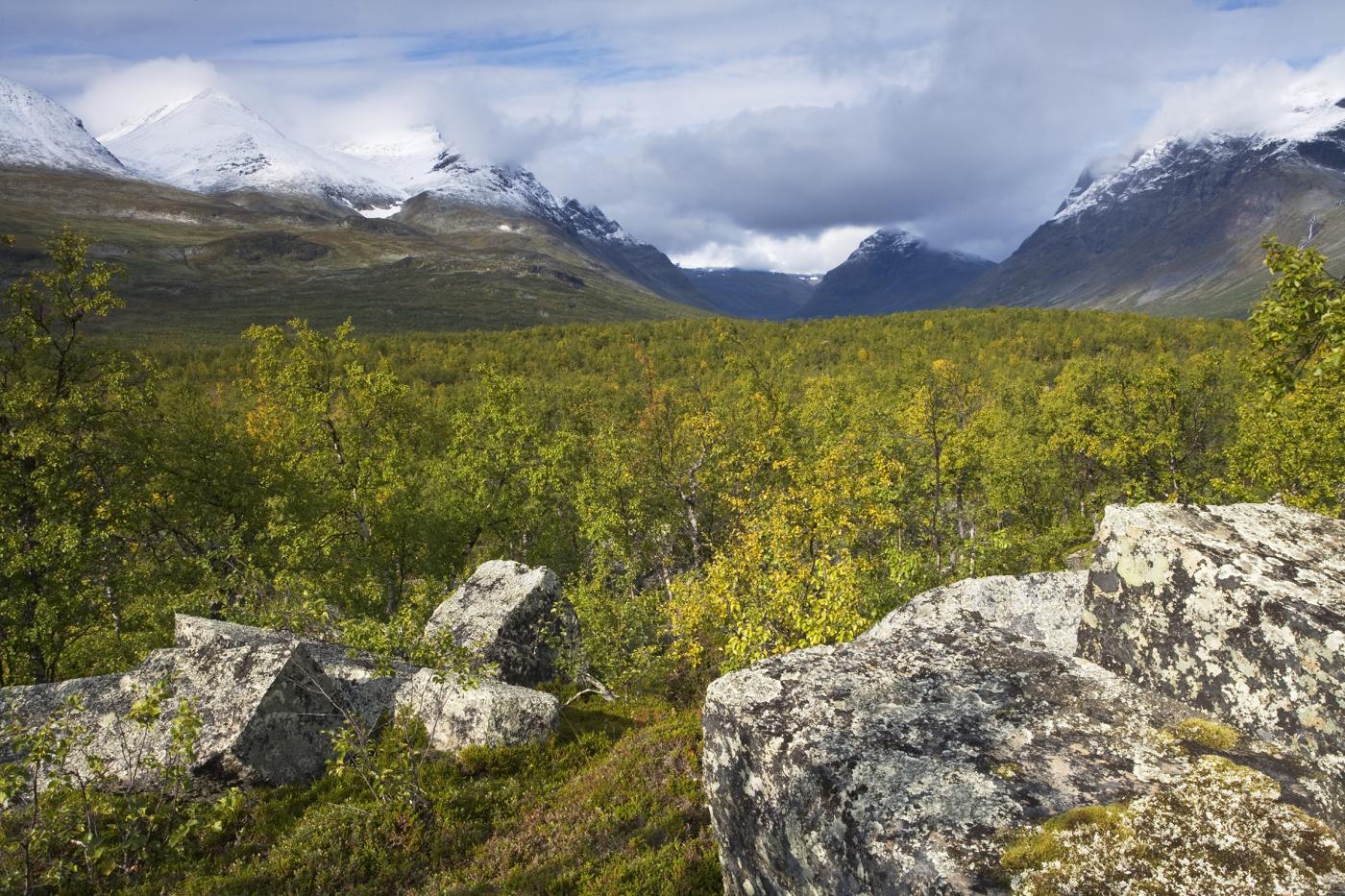 There is no ecological reason why significant parts of the Scottish Borders couldn’t more closely resemble landscapes like this in northern Sweden.

But the Mountain Birch Project is much bigger than our team of five. It hopes to connect with people outside of conservation and leverage Scotland’s vast community of outdoor enthusiasts. Stalkers, skiers, climbers and hillwalkers are all part of the target audience for this citizen science initiative. In fact, anyone who enjoys being in the mountains can help. All they have to do is record the location of any high-altitude trees they come across on their adventures. This will allow Scotland’s remaining mountain birches to be mapped far faster than any research team could manage on their own, and will also raise awareness about Scotland’s missing treeline amongst hill-goers right across the country.

Happily, this project joins a growing number of emerging montane woodland initiatives. The National Trust for Scotland, at its Ben Lawers and Mar Lodge estates, is actively mapping and restoring montane scrub. The charity Trees for Life is trying to link the woodland in Glen Affric and Glenmoriston by planting around the treeline on Carn na Caorach. The John Muir Trust and Woodland Trust are also both working to restore high-altitude habitats on their estates in Scotland and Northern England, and Cairngorms Connect – a landscape-scale partnership within the National Park – recently planted thousands of montane willows in the mountains around Loch A’an. Some privately owned estates are getting in on the action, too, reducing deer densities  and propagating montane species to try to reinstate a more natural treeline.

With all of these efforts underway, it is clear that a growing number of people recognise the importance of restoring montane habitats. As we head back down the hillside, I quiz the team about this, asking why they think Scotland’s missing treeline matters.

Sarah Watts, a PhD researcher studying montane woodlands, answers first. She explains that the treeline is not really a discrete, hard “line” at all, but instead a key transition zone in mountain environments. “It is a mosaic of habitats,” she says, “which fill the space between the timberline (where trees have an upright growth form) and the upper altitudinal limits at which trees can grow at all.”

“Woody [tree] species are an important structural feature in this zone,” she continues, “due to their direct influence on soil and microclimatic conditions. They improve nutrient retention, reduce surface run-off and mitigate the severity of extreme events such as landslips and avalanches. They can also provide shelter for wild deer and livestock, allowing the latter to be grazed at higher altitudes. All of this has economic value.” 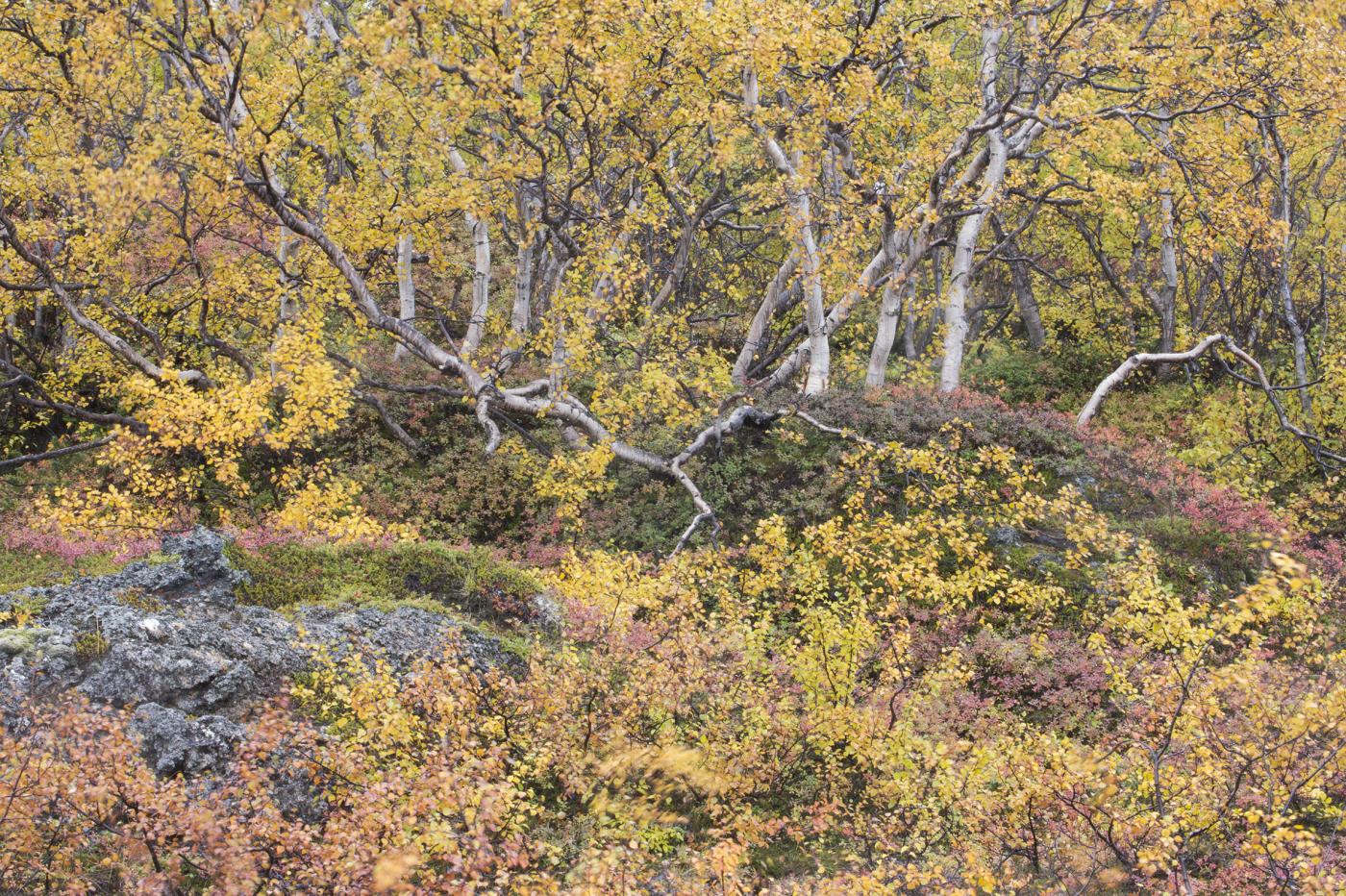 Autumnal montane woodland in Iceland, where species and structural diversity adds complexity to the landscape.

For Nicky, it is the act of restoring that is important, because of the people that process will touch. “It was time outdoors that initially sparked my interest in nature and made me want to protect it,” she says. “I know I am not alone in that feeling. Many in the mountaineering and climbing communities care deeply about Scotland's landscapes and want to do something to help conserve them. The Mountain Birch Project gives them that opportunity to restore our treeline habitats, while doing the things they love.”

“It’s really important to remember that it isn’t just the trees we want to see return,” says Gus Routledge, a freelance ecologist. “It is the diversity of structure provided by these trees. The birches will nourish and bind the soils, provide shelter from the wind and create a home for a wide variety of wildlife. Virtually all the species we currently find in our uplands would still make a home in this rich mosaic, just as they did when Scotland still had a natural treeline lacing across its landscapes." 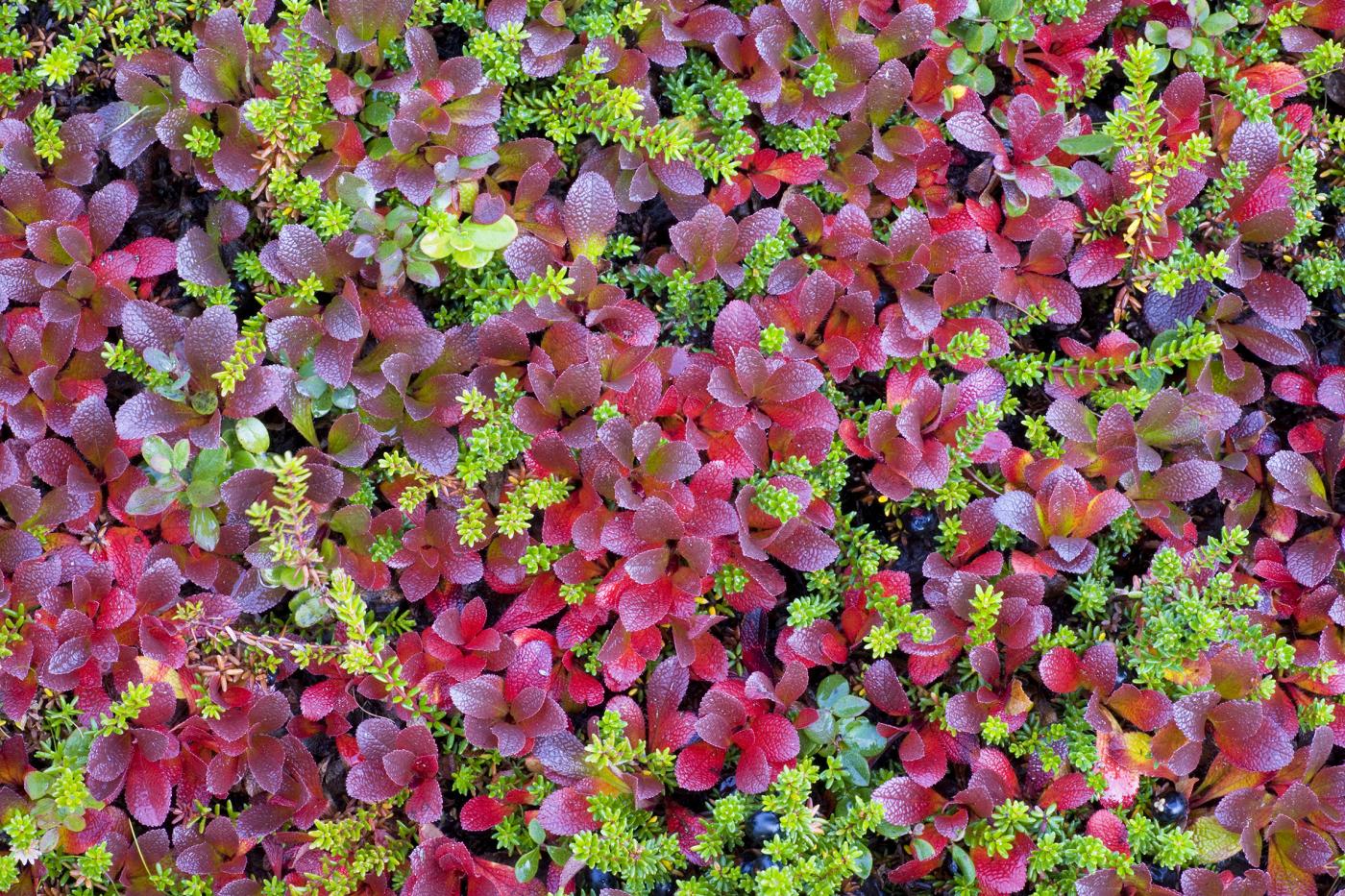 “When I think about what this initiative might achieve,” Gus continues, “I have an image in my mind. It is of bluethroat and redwing nesting amongst an open canopy of mountain birch, surrounded by a mosaic of alpine heath, grassland, willow and juniper scrub. Tall herbs such as alpine sow-thistle and wild angelica are thriving in this landscape, alongside red grouse and ring ouzel, both of which benefit from the increased food and shelter that the trees and shrubs provide. At this time of year, the autumn colour palette is rich and varied, with far more than just deer grass, heather or purple moor-grass to light up the hillsides.”